The life of Writing Wizard app

Writing Wizard 3.0 is released today, and it's a good time to look back at the story of this successful educational app.


Let's start by this annotated graph. In blue, you can see revenue from the App Store (parents sales), and stacked (in yellow) sales to Schools (VPP) 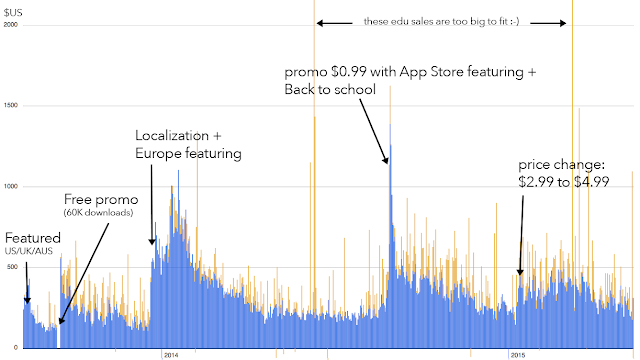 As you can see, it was not easy to get the initial traction even if I had already a good user base from my others apps, and that the app was featured in the App Store Education category (kids category was not existing in August 2013) and in many reviews sites. But as for any product, if your app is great, that people like it, need it and use it regularly, words of mouth/ recommendations will help your app to stay afloat. To make this happen, you need a happy user base and it may be difficult to get this. For this app, the trick was to put the app free for a few days with the help of influential web sites (including educational reviews sites that gave 5/5 to the app).  A little help from the App Store is, of course, very useful as well as some marketing, even if nowadays it is more and more difficult to do marketing because the market is so crowded.

I changed the price to $4.99 in January 2015 because I'm sure people are ready to pay this price for an app if they know it is a great app. As you can see on the graph, it worked from a revenue perspective even if, of course, downloads are a little bit lower. So it may not be wise from a market penetration perspective. So I think I loose some sales from people who find it via the App Store search engine and don't know the app. The trick would be perhaps to add Free with IAP version so people can try it before they decide if they are ready to spend $5 for it - but if I release a new free version, the app would not appear at the top of the search result because it is a new app... Note that I enabled the educational discount (50%) when I switched to $4.99 (it was disabled before because I think that $2.99 is cheap, even if the market does not really agree with me...) 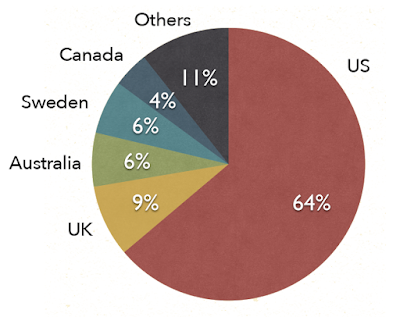 Tracing apps are tricky to localize because it seems that each country uses a different font (or even several fonts). Adding a font in Writing Wizard is not as easy as dragging a font file because I must create the entire font manually, so provided fonts are limited but it seems that a lot countries are happy with one of the provided font.

Since v2.0 had 3 fonts specially made for the US and I do most of the marketing in the US/English market, it's not a surprise that the US is the biggest market. However, UK market is really good as well, and that's why I included a new font specially made for this country in v3.0. I also added a font used in Scandinavia because Swedish people love my apps. I wanted to add a new font for Australia and another one for the US but I didn't have the time to do it (next update...).

The app is localized in German, Spanish, French, Italian and Swedish. However, except for Sweden, these countries are less interested in learning to trace print letters because kids mostly learn to write cursive/linked letters. In addition, it always difficult to get traction in a country where your brand is not recognized which is the case in Germany, Spanish-speaking countries and Italy. On the other hand, I released another version to learn to trace cursive and it's working very well in France and in the US.

For v3.0, I also added new localizations in iTunes Connect (like Chinese,Japanese or Russian) because I believe a lot of people need to learn to write latin character as well. However, since the visibility and search rank of the app is not great in these countries, I don't think it will make a big impact (and, even more important, I didn't localize the app, just the description in the App Store so it's far from perfect)

Since v3.0 allows to share word lists, the App Store need an option for 6 stars !

As we all know, ratings are super important because if parents don't know the app, it will one of the first thing that they will check. My issue with updates is that ratings almost disappear when you release an update. Previous ratings are hidden in the previous version tab and, even more important, there is no more ratings displayed next to your new release in the search results or if your app is featured. Unfortunately, all kids developers know that it is difficult to get ratings and reviews because kids can't rate the app...  So all these wonderful ratings will disappears (please rate my app ;-) )

So the app ranking average is about 50 in iPad Education. It seems to be sticky now even if lastly it seems that the search algorithm has a little bit changed and sometimes the rank is going down for one day or two.

So the app was released in December on Amazon, and January on Google Play. The results are:

Results are not fantastic but we hope that the market will be better in the future.  Most of the kids apps developers that release both on Android and iOS will tell you that they make between 10% and 20% of their revenue on Android. If we compare downloads (price is not the same on iOS and Android) , 10% of Writing Wizard sales are made on Android (13% if one doesn't include school purchase on iOS). Ranking on Google Play Education US is around 100 - So it can be better, we need a way to get more visibility.

So when you've got a successful app that people love, you have to release update. Updates don't mean that you will sell more apps but it is a good thing for long term sales. People are happy that you add new features (for free!) and they will recommend your app even more, and it helps to reinforce that your brand is taking care of its apps. In addition, it's even more complex for the competition to catch up.

In addition to new fonts for specific countries and the ability to share words lists easily, the big new feature is the ability to create tracing worksheets and print them. Yes, actually kids still need to write on paper ! With this new feature, the app now offers everything parents and teachers needs to help kids to learn to trace/write, and not only on the tablet. So I believe it will be a successful feature (I will let you know about it in my next post...)

It's always difficult to decide what new feature you need to add, but most of the time the answer is in one of the email you will receive from your user (and sometimes it's only one email because most of the killer features you can add are not obvious)